On this page I am setting myself the great ambition of touching on how to move from a beginner to an advanced practitioner of acro. I will start you with theory and move you on to acrobatic material. This page is a work in progress. The list below is an index which will take you to sections lower down on the page.

Learn about consent. This is very important in acro. If you don't behave you don't get to play. Educating yourself about consent is the best way to avoid making some really terrible mistakes. Also you can spot and address problem behaviors in other people before they get out of hand. 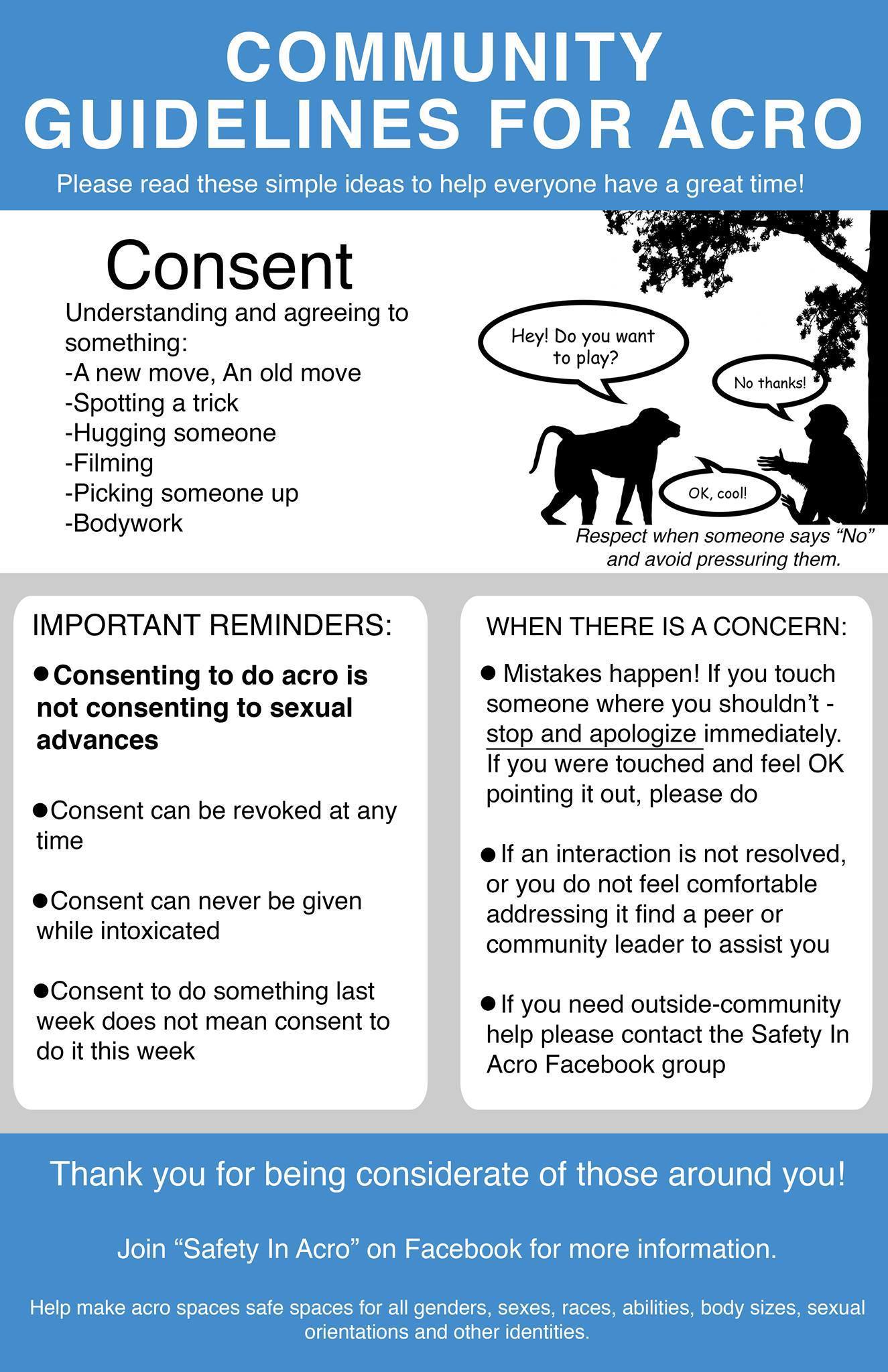 Sometimes professionally trained acrobats look at us acro people like we are crazy because we do things like teach flyers icarian front flips when they can't do a front flip on a trampoline, or we teach flyers standing hand to hand who barely can do a handstand on the floor. Acro people manage to learn a lot without strong foundations but acro people could learn so much more by working on the fundamentals. The fundamentals are too often avoided at acro workshops. It can be impractical to teach fundamentals because it takes so much time to make any improvements. For instance, who would take a three hour conditioning class at Acro Love? There is a guy, Jean Luc, who teaches handstands at festivals, so thats good.

My advice... Create for yourself a regular conditioning and flexibility practice. I do mine in the morning. I got started on a half hour workout in the morning which I do before work. I got this from the Yoga Slackers. I have been going strong on this for the last five years. Does this sound hard? Acro is hard. I love acro because it is hard. If acro was easy it would be called foot ball. The more strong and flexible you are the better. I recommend lots of plyometrics, body weight exercises.

Let's say you are just getting started on your acro journey and you want some tips on the first things to try. I will put together some material for you to work on. First you will need to try the basic poses.

There are far more basic poses than this. I made videos of the common ones and I will add to this over time. 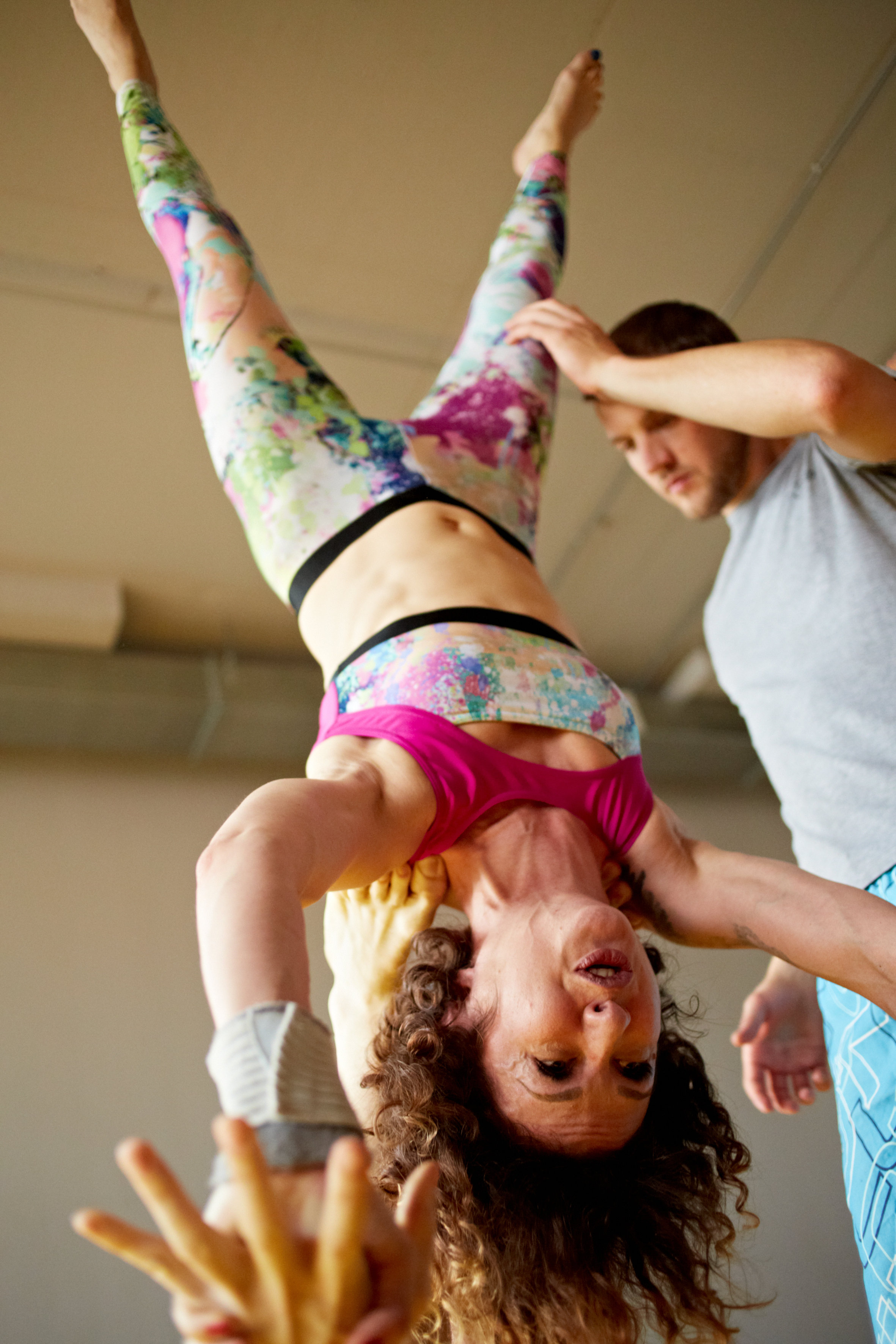 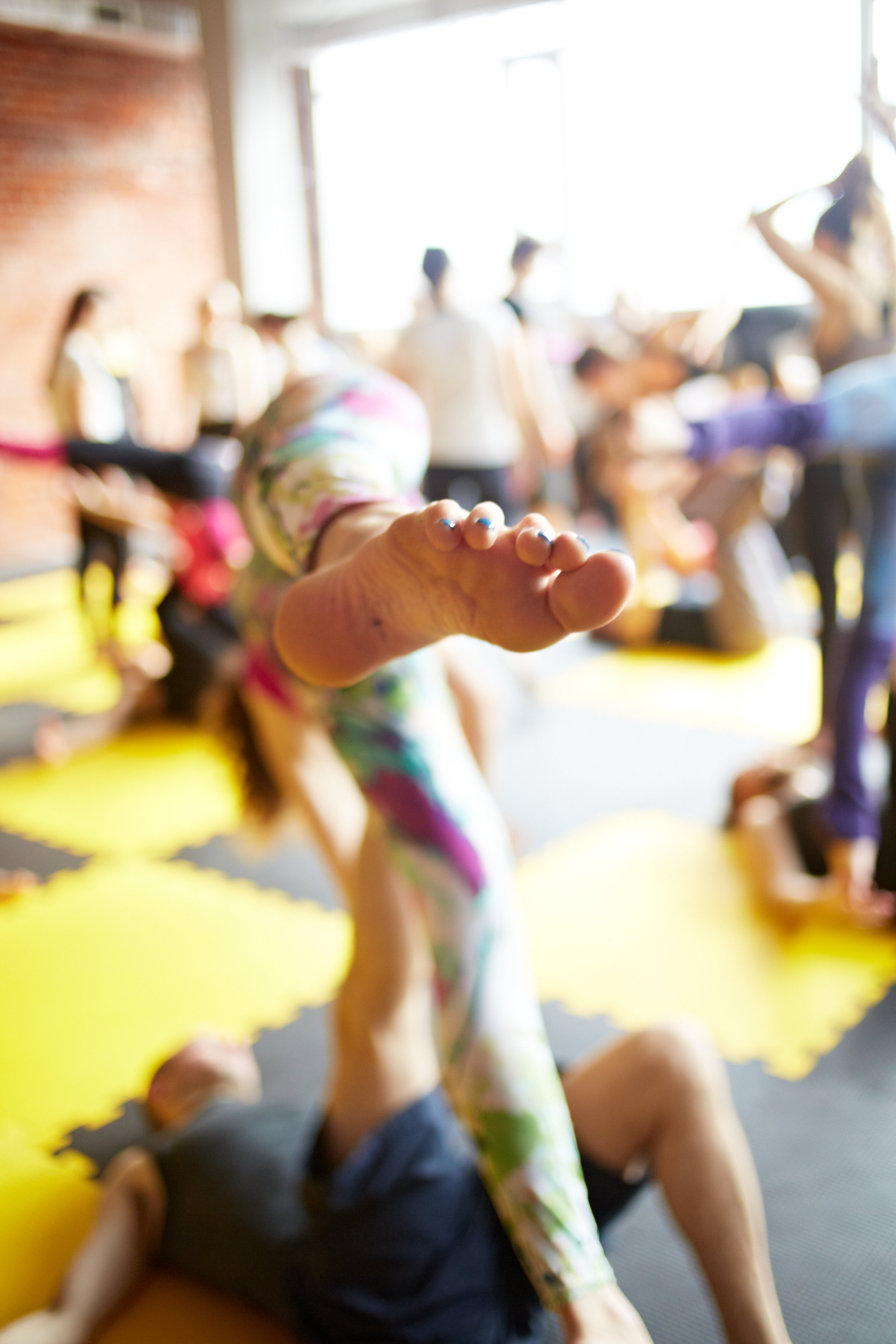 Then you will need to start trying dynamic transitions and L-Base drills. Aaron Lind's 22 Skills are especially useful for finding your skill level. You are at an intermediate level if you pass all the skills in that video. A wise woman once said, "The most common type of acrobat is the beginner who thinks they are intermediate."

Next try some basic washing machines. There is also an "easy washing machines" section on the main page. Washing Machines are important in your l-base practice because you learn so many movements which you would never encounter doing poses or simple dynamic transitions. Important ones to learn first are Ninja Stars, Barrel Rolls, and High Barrel Rolls. Debbie and I use these three as a test to see if you qualify for our intermediate workshops. If you can do these machines confidently, not just barely, then you are a solid intermediate. We have a few free lessons because we want to help people get past being beginners and become intermediate. Those free ones are...

If you practice these washing machines then all the others will be much easier to tackle. Debbie and I go into great detail explaining every part. In case you are a teacher we teach how to teach it as well. The Tarzan is another notoriously difficult move. It only takes one second to do well, but if you are beginning at it this move is like banging your head against a wall. Once you get tarzans a whole new world of moves is open to you.

Symmetrical Machines on our main page

Hand to hand is in the purview of more intermediate acrobatics. Having a good hand to hand is a good first step. That being said a hand to hand is much different than handstand. I didn't learn how to do a hand to hand until two years into my practice. This was partly because back then I didn't have a teacher or even know anyone who could do a hand to hand. If you have a good teacher you might learn how in a few days. The best way to learn it is to start in star and then the base will slowly lift the flyer off of his/her feet by pressing the flyer up. We have a patreon video which explains this.

Typically people learn H2H and RH2H in supine position first, usually with elbows on the ground. Later they move to arms extended supine. Then later they try standing. After that they they all the harder moves which require a good hand to hand practice such as all of these. 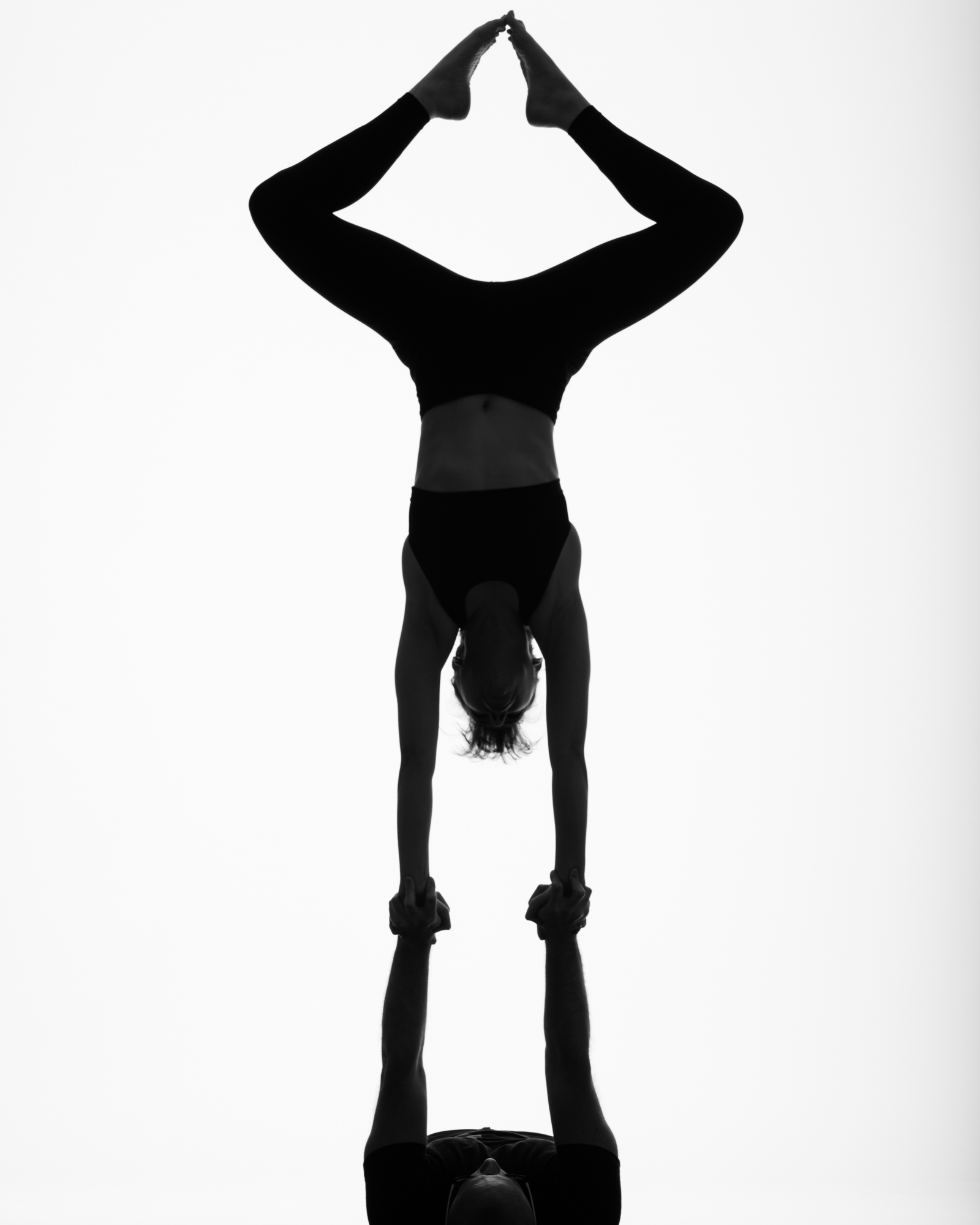 Now start working on whips. Tarzans are the most important to learn. If you get those down then harder whips will come more naturally. Debbie and I made a whole Patreon lesson on this. Usually the first 3/4 rotation whip people learn is a reverse throne back whip. It is easy because base and flyer can hold hands the whole time. Throne back whips are harder but Debbie and I made a tutorial to help you learn. Beware of whips. I know two people who have gotten pretty bad concussions. Use spotter and accurate self assessment.

Whips very well might be the most specialized type of acro. Good whippers are rare. The greatest barrier is that bases must learn how to scooch their feet in just the right way. This can be hard to teach. Debbie and I dread teaching whips because of the difficulty in learning how to foot-scooch. Students can look right at the move and we can explain it as best as we can and some bases still will not get it. If this happens to you don't worry. It just takes time and patience. We plan to make some more comprehensive videos on whipping soon.

That being said, easy standing moves can be easier than easy l-base. I have taught workshops where I had to give up on teaching l-base because few of the bases had enough flexibility to do even the most simple l-base moves. I had to switch to flags and thigh stands which were easier for the bases. I have seen James Hughes teach pretty advanced standing acrobatics to beginners.

Generally an acrobat will start with l-base and move on to standing. My first love was l-base but at festivals I will go to mostly standing classes because that is where my edge is. So if you are starting out with standing what moves do you start with? I like to show people flags and thigh stands first. 2 High is another good beginner standing move. I have a more comprehensive list on the main page under the standing section 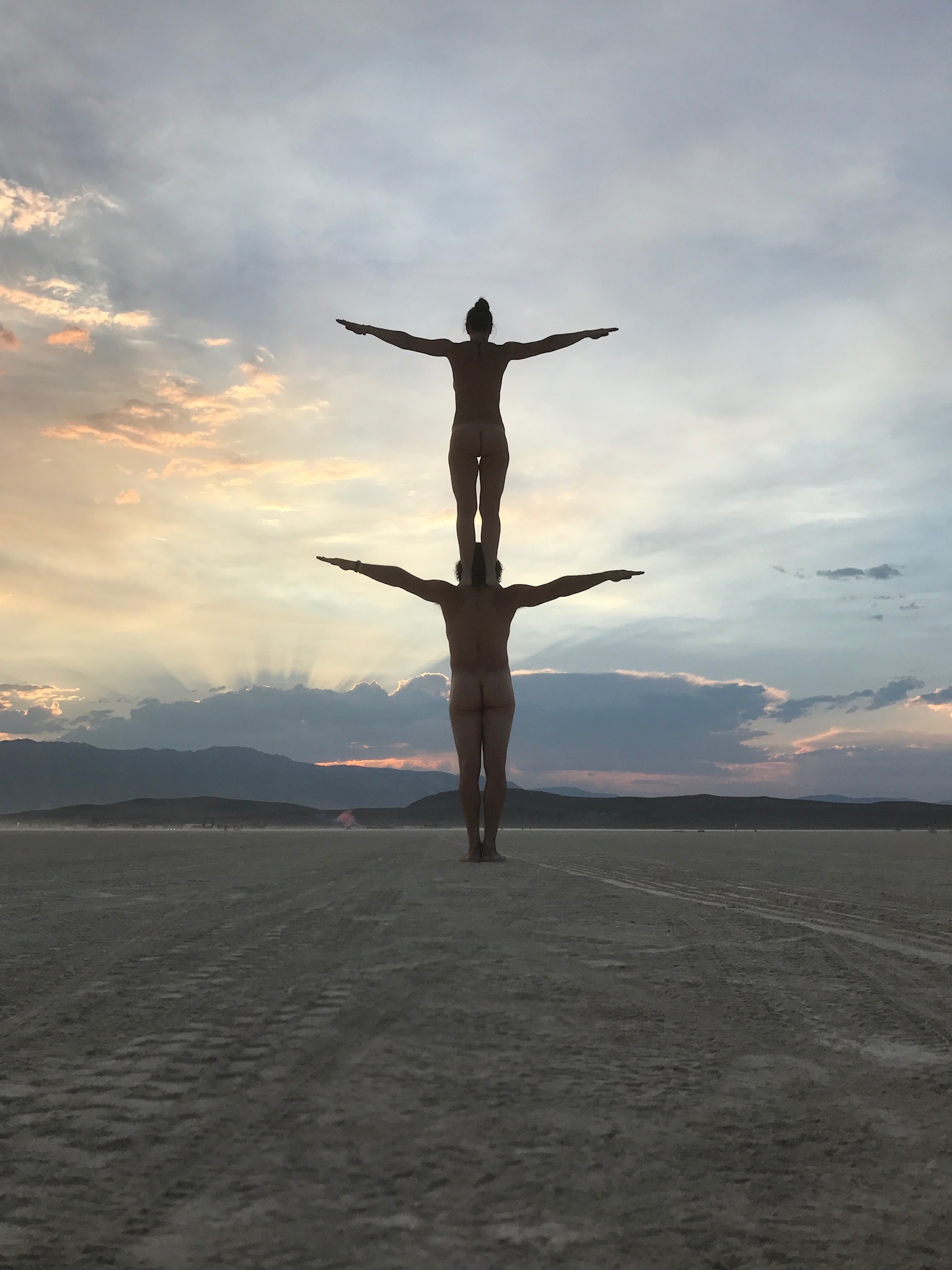 Now start working on pops. Generally you need to spend a long time learning washing machines, poses, and dynamic transitions before you have enough innate knowledge to start working on pops. I didn't learn popping until about two years into my acro practice. I thought, "Why up the danger level so much when there are so many fun non-popping washing machines to do?" Of course you can learn pops as long as you use accurate self assessment and spotters and mats.

The most advanced type of l-base is Icarian. Icarian is named after Icarus from the Myth of Daedalus and Icarus. Icarian is loosely defined as full release pops. There are some pops which are not full release, where you pop flyer butt but hold hands for instance. Icarian goes from easy to completely insane! Look at this video from the Addis Brothers.

Icarian is the only type of l-base which is considered to be advanced at festivals. Some icarian enthusiasts use icarian chairs or at least a butt pad which sets the base's legs higher in the air. This allows for more power and greater range of motion. In some icarian moves the flyer will hit their feet on the ground if the base is not elevated. Some bases prefer chairs or pads because this lessens the strain on their backs. The only problem with an icarian chair is once you start training on one then you can only do acro with your icarian chair. Some bases, including Debbie, Jacob, and Duo Die, prefer to use no chair or pad for the convenience of not having to carry one around all the time. I have a growing list of icarian moves on the main page. Click here 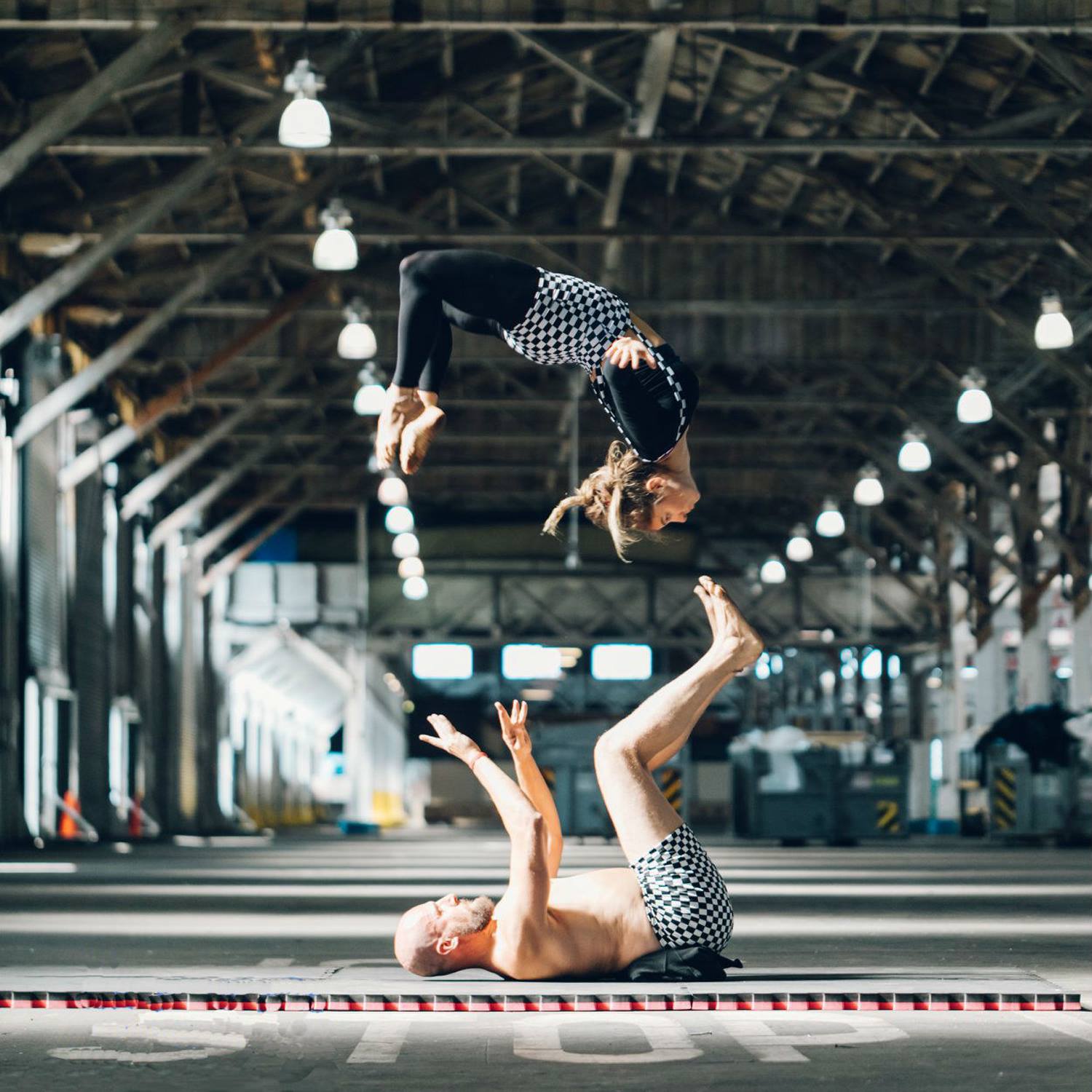 Relationships come in many forms in the acro community, and here I don't mean "relationship" as only a romantic relationship; it can mean any type. Typically you have a romantic couple which plays primarily together and also with others. I know others who are in a romantic relationship with one person and a platonic relationship with their acro partner, that's cool too. It is important to understand that even people who play together all the time, even if those people are heterosexual men and woman, might remain just friends forever, and this is okay. They might enter into a relationship too. This is fine too, as long as you do it right. I am not a relationship expert and I am not qualified to delve into all the complexities of human relationships. Many of the problems associated with romantic relationships in the acro community are perpetuated exactly because they are hard to talk about and consequently not talked about. Honestly there is a lot more I want to say but I left it out because some of my opinions might appear to provocative. Some teachers avoid the morass all together by proclaiming that romantic relationships should never occur in the acro community. However this is like the prohibition of alcohol, where prohibition did not make the problem go away, but only caused it to morph into a worse problem in the shadows, as an elevation in crime. So, romantic relationships in the acro community may be entered into only with the utmost levels of conscientiousness. The acro community is like a fragile ecosystem and dating can be like driving a monster truck around in a rainforest. If you do that you will run over rare plants and scare the birds away. Is that what you want to put your friends through? I hope not. You can visit the rainforest but you have to take care to respect the wildlife. If you neglect to learn the customs of the local tribes you may offend them and be cannibalized. If you enter the rainforest to smell the flowers, swim in the rivers, and see the waterfalls then you had better leave the rainforest in an even more pristine state than the one in which you found it.